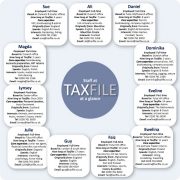 [Updated]: It’s common knowledge that most of Taxfile’s South London staff are multi-lingual but can you guess which staff member speaks no less than four languages fluently (Russian, Pashto, Dari and English) and which staff member is into both metal music and Irish dancing? And who should you ask for if you need payroll services? And who specialises in bookkeeping … who in limited company accounts and so on? Our staff ‘mind map’ tells you a bit more about each member of the team, what their specialities are, key interests and, of course, their contact details in case you ever need their help. Take a look … END_OF_DOCUMENT_TOKEN_TO_BE_REPLACED

Exactly eleven months ago at time of writing, HMRC launched ‘RTI’ (Real Time Information) in the UK. This is the mechanism through which employees now have to report PAYE information for employees on the day it actually happens, or alternatively before that day, for example to confirm to HMRC each time an employee is paid through PAYE, including any NI or Income Tax deductions. RTI is, almost without exception, for all employees including those whose earnings fall below the NIC’s Lower Earnings Limit (‘LEL’), e.g. students.

The RTI reporting has to be done electronically using payroll software, whether that’s the employer themselves reporting it, or their nominated accountant, payroll bureau or bookkeeper. The information reported to HMRC will also now need to include new information which includes the usual hours worked by each employee and any unusual break in the normal working pattern, for instance if an employee takes unpaid leave. RTI also includes other changes to how various things are reported e.g. starter and leaver dates and also employers no longer need to submit end of year forms P14 and P35 because this will be handled on the last Full Payment Submission (‘FPS’) for the tax year in question – this is due in less than a month  at time of writing as the new tax year begins END_OF_DOCUMENT_TOKEN_TO_BE_REPLACED